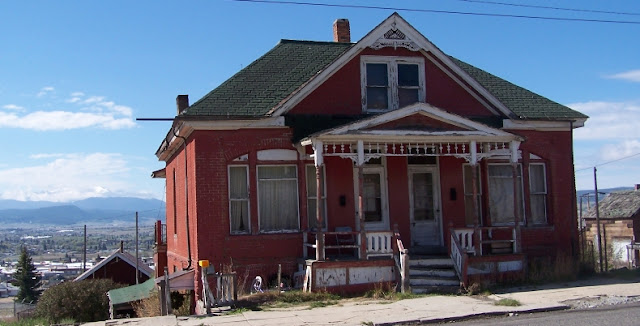 This house was one of four duplexes in the 300 block of East Granite, and one of two that survive, directly across the street from the Butte & Boston Company’s Blue Jay Mine. It was constructed between 1891 and 1900; in 1900, it had a full porch in contrast to the central partial one seen today. The house has a daylight basement, a central gable, and eyebrow dormers.

In 1900, the east half (326) was a dressmaking shop, according to the Sanborn map, and residence (based on city directory listings), while the west half (324) was boarding. Mrs. Sarah Cross (born New York of Irish parents) rented 324 in 1900, together with her three children, a servant, and two miners who were her boarders. At 326, the dress shop, Robert and Ida McElroy lived with a boarder, Michael Call, a miner from Michigan. Robert McElroy was a teamster (or miner) from Canada, of Irish descent, while his wife Ida was French-American from Minnesota. Thus in 1900, a total of 10 people lived in this building. Such complex living arrangements were common in Butte in the 1890s through the 1930s.