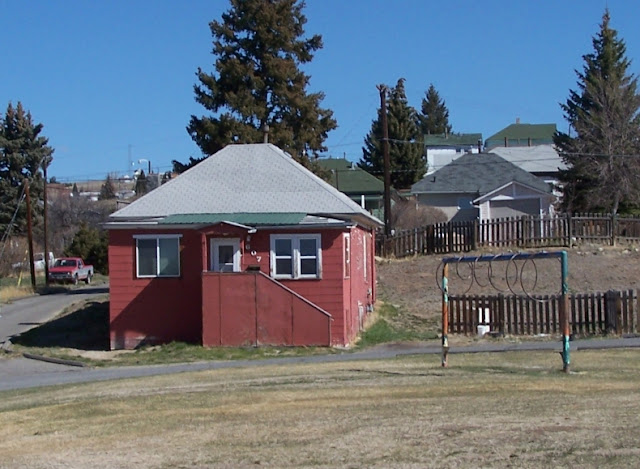 This typical four-square miner’s home sits isolated today, as it always has. To the west was Missoula Gulch and the Anselmo Mine yard; to the south, Cherokee Park today (in the foreground of the photo above), was the Silver King Mine. The four lots to the east on Copper Street have always been vacant, mapped as “gulch” on the maps from 1900 to 1957.

The house is of solid brick construction, not just veneer. By 1910 the Michael J. Shea family began a long tenure here. He was a miner, working at the Little Mina in 1910 and the High Ore in 1917. Michael J. died about 1941, but his widow, Mary, and their children Margaret and Michael C. continued to live here. Michael C. followed in his father’s footsteps as a miner, employed at the Anselmo in 1945. Son and daughter lived here into the late 1950s. Margaret worked as a dressmaker and clerk for several grocery stores until about 1960, when she became a dispatcher for the City Taxi Company. She worked there until the late 1970s, and lived here at 607 until 1979. The house stood vacant for four years until it came into new ownership in 1984.

Resources: Sanborn Maps; city directories. Photo by Richard I. Gibson.
Posted by Richard Gibson at 10:56 AM