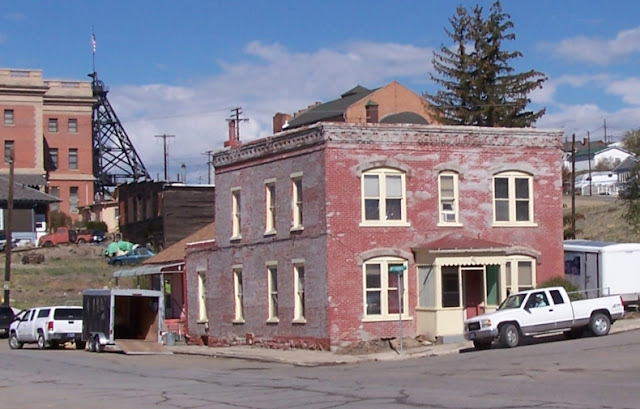 This boarding house at the corner of Copper and Wyoming Streets was built in 1896 at a cost of $4,000. It is a brick-veneered frame two-story flat, with decorative brick corbelling at the cornice.

Mrs. Maggie Shay was the original owner and manager of the house, conveniently located almost at the foot of the Anaconda Road where thousands of men passed every day at shift change time. By 1900, Thomas Curtis was running the boarding house. In 1910, the place was managed by Mrs. Irene Crossan. Peter Hastings, an immigrant from Ireland, came to Butte about 1915 and lived here in 1916. Peter died in the Granite Mountain fire June 8-9, 1917, and was buried in the mass grave in Mountain View Cemetery containing the 66 unidentified bodies from that disaster.

In 1935, Mrs. John O'Neill lived here. See this Butte History post for a story connected to her and her son, a policeman killed in the line of duty.

The address here was 417 N. Wyoming for much of its early history, changing to 401 sometime before 1951. The photo above includes a lot of history in the background: 31 E. Copper at the left edge of the view, with the U.S. Federal Building behind it; the Original Mine headframe; St. Mary's Church beyond the roof of 401; and a little house immediately behind 401, to the left, which was moved from up the Anaconda Road.