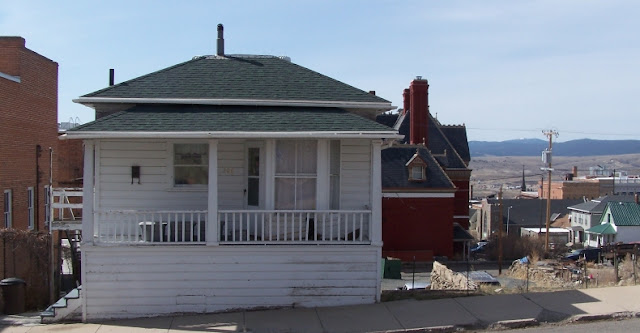 This four-square house, a typical workingman’s cottage one block north of William Clark’s Copper King Mansion, was built as a 1½-story structure before 1884, set back from the street. By 1888, the two-story section was added to the north, along the street. It is a wood frame structure with a stone basement.

In 1914 the Trueworthy family began a long tenure here. Edward Trueworthy was a miner at the Tuolumne Mine in 1917; he worked at various mines over the years, including the Butte Main Range. His brother Fred, a carpenter at the Black Rock Mine in 1917, also lived here in the 1910s.

By 1928, Ed Trueworthy, his wife Mayme, and their children Charles, Edward Jr., and Margery were here, along with a boarder, John J. Dolan, a miner at the Etta Mine. Ed was working then as a machinist or mechanic at the Montana Auto & Garage, 202 East Broadway. Edward Jr. continued to live here with his wife Jessie until about 1969. In 1964, they still had a boarder, Dennis Abeyta.

The vacant lot to the west of this home is unusual in that it never held a house. It is the site of one of several shafts of the Silver King Mine. There was a house on the corner of Idaho Street, just west of the mineyard, which was only one lot wide.