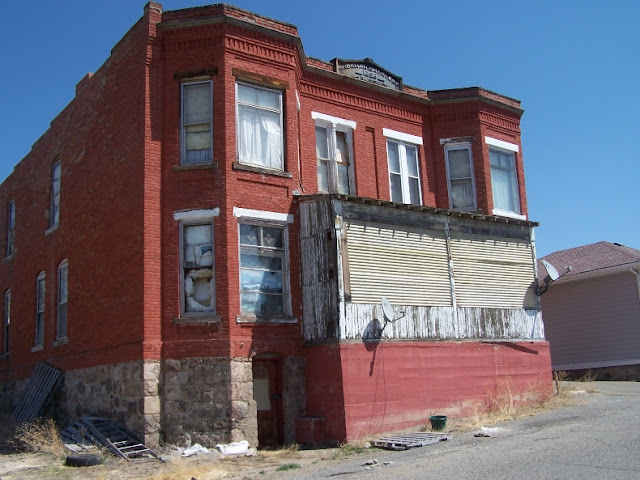 Norman Charles was an early Butte resident, listed as an expressman (a cargo manager for a railway company) in 1885. By 1891, he and partner John King (later, Charles partnered with John Spargo, who roomed at 117 W. Copper) were operating a saloon on the west side of the cable line, “2 south of power house”—meaning the electricity generating station for what was evolving from the cable car line to the Butte Electric Street Railway. The saloon location was at the corner of the alley west of Main Street and the alley between Agate and Ruby Streets just north of the location of the boarding house in the photo above. Charles lived on West Agate Street, in a house at #7.

By 1900, Charles had moved his saloon to a more prominent location, 69 East Park, in the east half of the building housing Rudolph’s Furniture today. And he was successful enough that in 1898 he erected a large double-bay fronted boarding house at #3 West Agate, shown in the photo above. The parapet reads “Norman Charles Block 1898”. The porch enclosure is not original. The Charles Block replaced a large double-bay-fronted frame dwelling of 1½ stories, probably Charles' previous residence at #7, but the address scheme is unclear for the 1880s and early 1890s.

This enclave of a few blocks was surrounded by industry, with the trolley barn and power house a block north, the Clear Grit mine a block east across Main Street, and railroads, both the Butte Anaconda & Pacific and the Montana Union, bounding the northern and southern limits. There was a gulch to the west which ultimately drained south, past the Original Mine and the Court House. That gulch is still present today as a culvert that approximates Alaska Street and continues underneath the heart of the central business district. The photo below, from Jean Koskimaki's collection from the 1950s, shows the isolation of this area. Of the buildings in the photo below, only the Charles Block still stands. 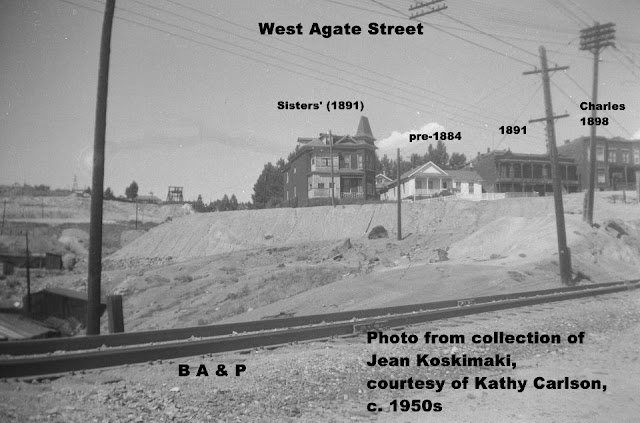