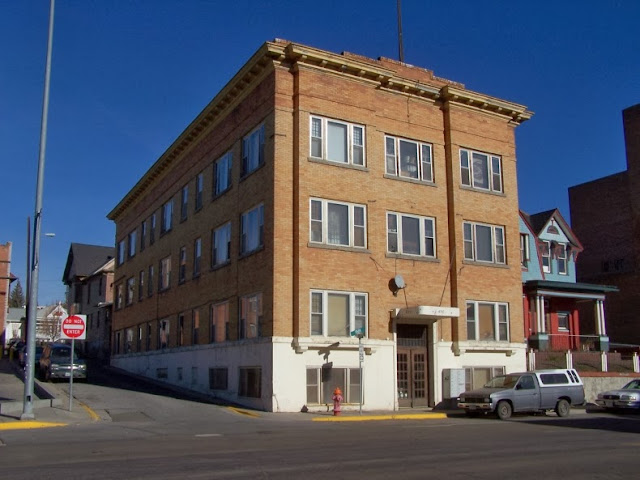 Built by William Robertson for the Tait brothers, this residential hotel is typical of many erected during Butte's population explosion in the 1910s. John Tait was a dentist in 1910, in partnership with A.H. Cole with offices at 48 W. Park. John’s brother George was a clerk for the Anaconda Company, boarding at 844 W. Silver. By 1914 the Taits were evidently successful enough to branch into real estate, hiring William Robertson to erect the Tait Hotel on East Broadway that year; John lived at the Tait Hotel in 1915-17. In 1918 John's office was on the sixth floor of the Phoenix Building and George was a teller at Miners Savings Bank, and both lived at the Apex once it was completed. In 1928, George was out of the picture, John had moved his office to room 103 in the Pennsylvania Block, four blocks east of the Apex Hotel, and his wife Hattie managed the Apex.

The Tait family home in the 1890s, where I believe John and George lived as children, was at 13 West Copper, next door to a Chinese Laundry. It is a vacant lot today. Their father Robert was a contractor and a carpenter.

So far as I can tell, Dr. John Tait was only directly associated with the Tait Hotel on Broadway Street until 1918 when the Apex was built. Beginning in 1917, he is no longer listed as the proprietor of the Tait Hotel, which was run by Mrs. Niconor Swanson.